The second annual Mike Weir Charity Classic kicked off tournament week at the RBC Canadian Open with amateur golfers pairing up with marquee celebrities from the music, sport and entertainment industries as well as top stars on the PGA TOUR.  Amateur competitors played nine holes with a PGA TOUR pro and nine holes with a celebrity.  The team of Retief Goosen and Canadian Olympic gold medalist Jon Montgomery combined with the amateur team from Southwest Sun for a team net best ball score of 55.

Mike Weir and his Foundation as well as RBC and Golf Canada would like to thank everyone that helped to make the second annual Mike Weir Charity Classic a success.

The Wine Ladies TV was there to catch all the action and fun, If you would like to see the entire one hour episode coverage visit www.thewineladies.com or www.thatchannel.com/thewineladies 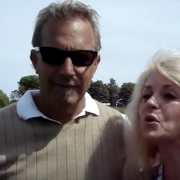 The Canadian Tenors at Jackson-Triggs!

Forgot the cork screw! No problem. Open the wine with your shoe! Ask The Wine...
Scroll to top