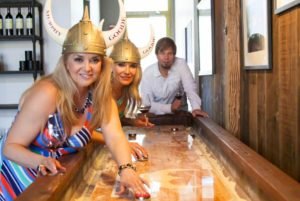 One Sip at a Time, The Wine Ladies TV, Kendall -Jackson and Murphy-Goode Winery, Episode 3

Sonoma County California… glorious sunshine, stunning landscape of rolling vineyards caressed by the coastal winds off the Pacific ocean, perfection for grape growing particularly Pinot Noir, Chardonnay and Zinfandel. The wineries are somewhat spread out allowing for picturesque sun-drenched easy going road trips made extra pleasurable due to the gentle cool breeze that characterizes this region.

If Napa Valley is the Hollywood of the north for wine lovers, and make no mistake it is a phenomenal wine region, sure to be on ones bucket list, Sonoma County in contrast is a little more casual and laid back, taking life, perhaps a little less seriously. Not so for their wines however! Brilliant wines come out of this coastal region consistently garnering prestigious awards in both national and international competitions.

We recently had the opportunity to visit Sonoma County as guests of Kendall-Jackson Winery, one of the iconic wineries founded in 1982 by the legendary Jes Jackson. Legendary, as Jes Jackson created a wine empire, at such neck breaking speed, breaking all kinds of records, shifting paradigms of wine making, creating award winning wines and spearheading important changes and advances in the California wine business.

Jackson was a family man, who originally bought a pear and walnut orchard in Lakeport for himself and his family as a respite from his bustling law practice in San Francisco. Not a respite at all as it turned out, at the age of 52 Jackson created his first wine forgoing the walnuts and the pears having switched to wine grapes. The Vintner’s Reserve Chardonnay in 1982 was launched, putting Chardonnay on the map in California, which enjoyed very few plantings across the state at the time. To date Vintner’s Reserve Chardonnay has been the top selling Chardonnay in America for over 22 years.
We invite you to check out our adventure at Kendall-Jackson here