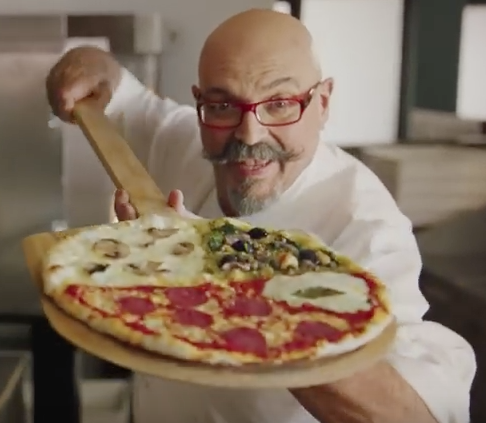 From the historic Italian city of Cremona where the most famous violin hails, begins the culinary journey of a man who would become one of Canada’s most celebrated chefs, Celebrity Chef Massimo Capra.

Massimo Capra’s passion for embracing life, for enjoying food, good drink, friends, family and the community is unparalleled. He simply draws you in to this world, his world, la dolce vita, or the sweet life!

And what an extensive world it is. Massimo came to Toronto in 1982 starting out at family owned Archers restaurant. By 1989 he became an acclaimed chef at Prego della Piazza where he remained until 1997. That year  he opened with Paolini, formerly of Splendido, Mistura Restaurant.

Massimo grew up in a small town Cremona located in Lombardy northern Italy. We learn from Massimo, over a delicious glass of chilled Bersano 2015 Gavi di Gavi, that in Cremona most folks raised their own chickens. Like many folk Massimo lived on a dairy farm raised their own meat and lived off the land.

A story that was to be his first and his family’s first introduction to a fine cut of meat.

With only three butchers in his village butchering one animal each per week, it was only plentiful enough to serve the folks with better “means”. “For us the farmers, we went to buy the meat that was second grade, you know the kind of meat you had to boil for close to four hours to become tender”, Massimo explains.

After spending some time cooking and in cooking school, a new world of food opened up to him and ignited his passion.

Upon securing his first job, at the age of fifteen, he saved up enough money to buy four entrecote for himself and his family. “The butcher was skeptical at first”, said Massimo  but accepted Massimo’s pre-order only with prepayment. After a two week wait for delivery of this superior beef Massimo’s entrecôte was finally masterly cooked, served and applauded, from there Massimo never looked back! 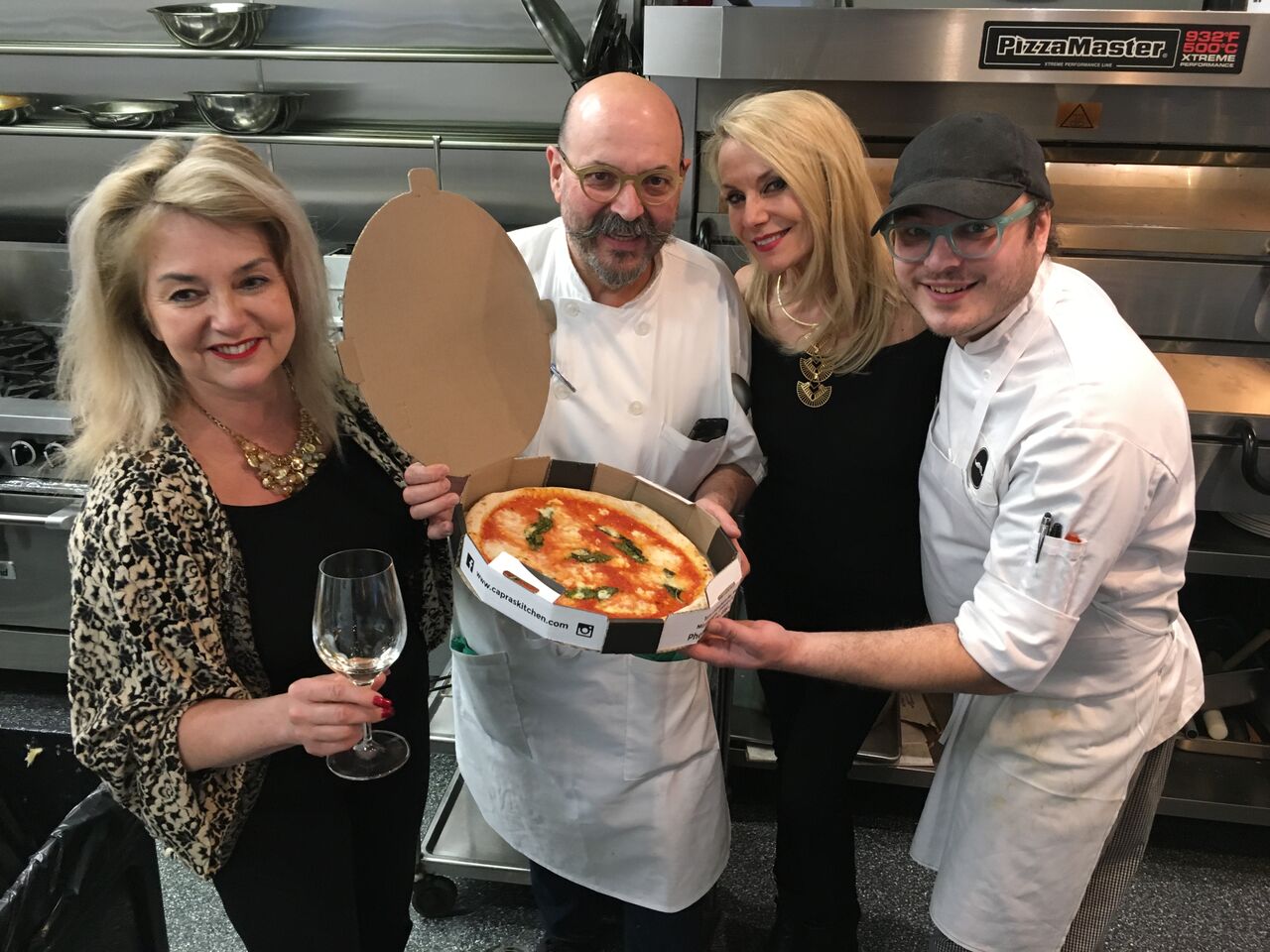 Chefs Massimo and Daniel Capra dishing up the pizza at ” Capra’s Kitchen”.

Easily accessible, you can find Massimo today at “Capra’s Kitchen”, his latest restaurant venture located in Clarkson Village, in the heart of Mississauga. Opening to rave reviews, Capra’s Kitchen does not disappoint. The menu is creative, the dishes mouth watering and the presentation a feast for the eyes. Therefore, Massimo can be found either busy in the kitchen or on the floor chatting up the customers and posing for selfies.

What do they say? Behind every successful man is a woman. The point is Rosa, partner and wife is a big part of the magic here at Capra’s. Super talented, generous in spirit and warmth, everyone loves and respects Rosa! Clearly all the patrons enjoy a slice of Capra’s dolce vita.

The menu is focused on Massimo’s mouthwatering pastas, pizza and antipasto. We treated ourselves to a classic pizza, prepared by the hands of gifted Chef Daniel, son of Massimo! Yes, it is all in the family. The pizza Margherita was delish!

We are completely content, ready now to bid farewell. We will be back. Alas not so fast! Massimo motions and a glorious desert arrives, quintessentially Italian, a mouth watering Tiramisu. Not like we needed any kind of a lift,if you will, but tiramisu translates literally to “pick me up”, “cheer me up” or “lift me up”. We are already on cloud nine with such a fabulous evening of amazing food, great wine and in such an inviting and relaxed atmosphere. Thank you everyone at Capra’s Kitchen, you all made it a special time. We will be back!

Over the years with Massimo, we look back and remember a few choice times we have spent together!

Gavi di Gavi comes from the district of Gavi located in Piedmont in northwestern Italy. It is made from the indigenous white grape Cortese, which dates back to the 17th century. These wines are known for its wonderful acidity from the lime-scented soils in this area. As a result, the wines are generally fresh, crisp and mouth watering when done well.
We enjoyed this Gavi di Gavi from the producer Bersano founded in 1907, crisp and inviting, lots of citrus with hints of white flowers and touch of mineralality, delightful.

From the most acclaimed winery in the Veneto region, Allegrini, going back nine generations and known the world over for this particular wine, we discover the Palazzo della Torre 2012. From the Valpolicella Classica region, the grapes are sourced from a single vineyard situated in the foothills of Fumane, it is named after the adjacent villa, Palazzo della Torre, an important part of the Italian renaissance. Unique to this wine is how it is crafted, a small percentage of the grapes are left to dry out for a few months and then added to the previously vinified fresh grapes. The wine is deep ruby red in color, is velvety, smooth and full bodied, rich with dried fruit aromas of raspberry and plum, great fruit with chewy tannins and a lingering finish. 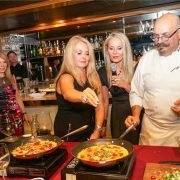 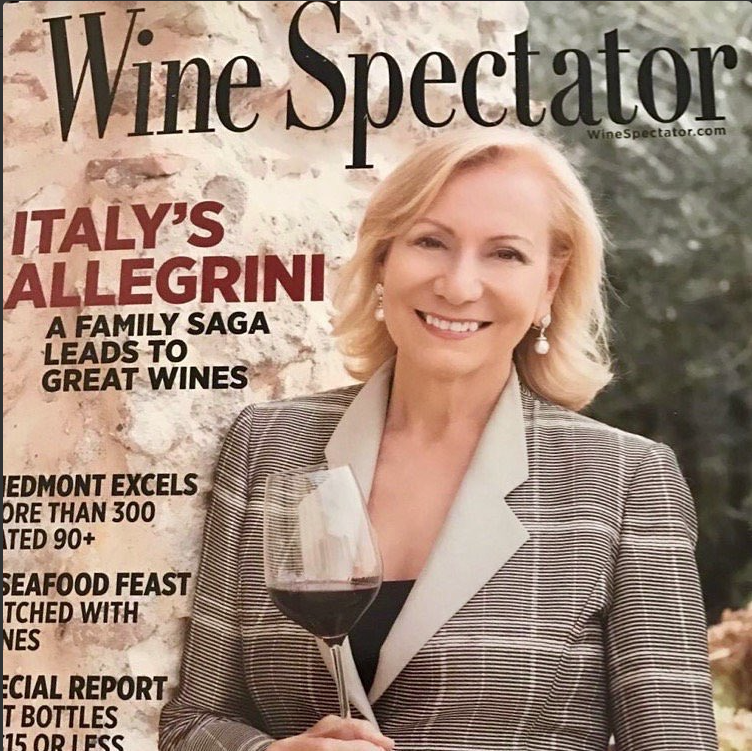 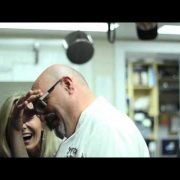 Join us on this week’s Audio Podcast, International Women’s Day...