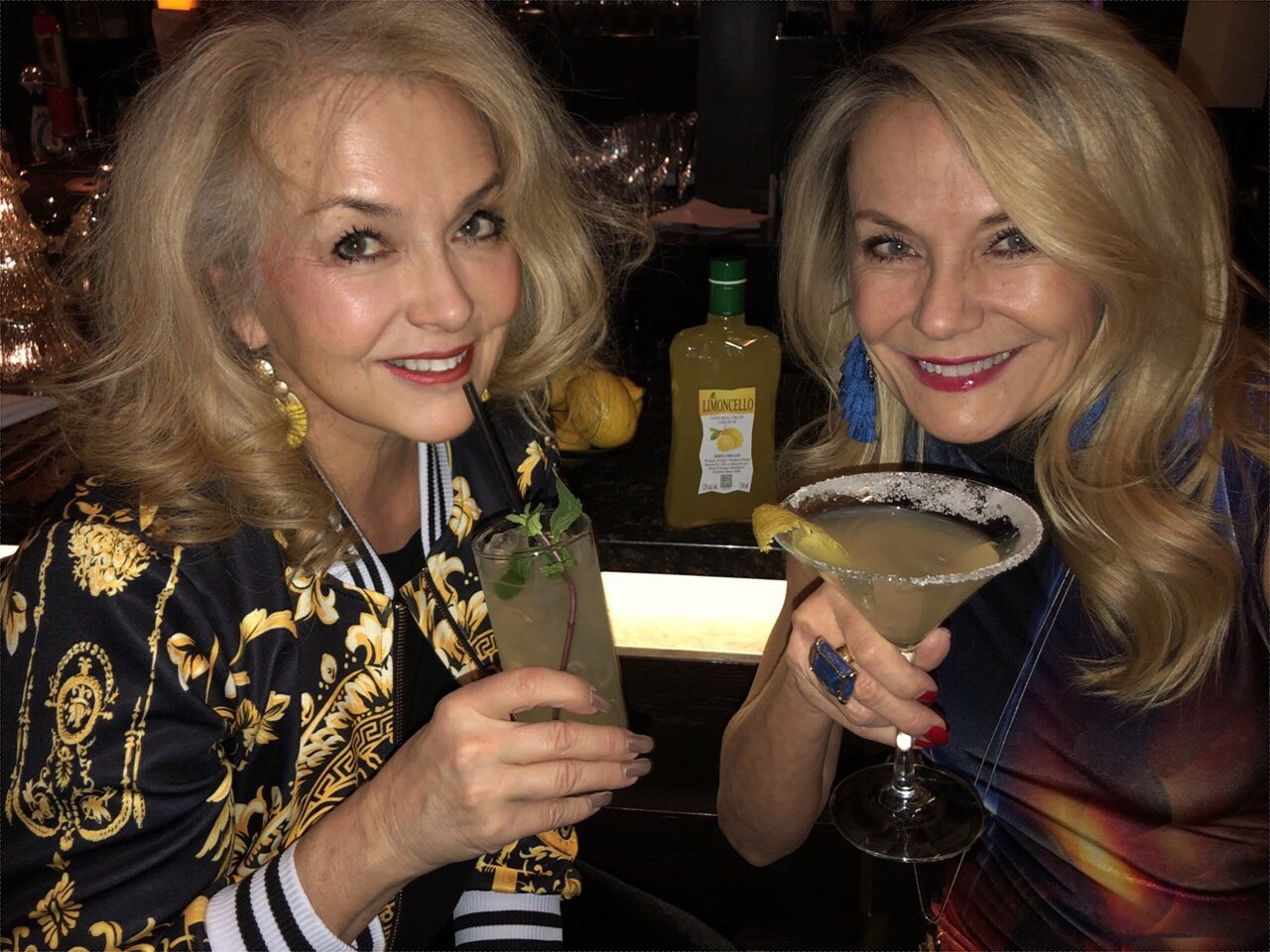 When they’re from Amalfi, we say Malfy

In Italy’s southern region of Campania one will find a beautiful coastal town perched on the high cliffs of the Sorrentine peninsula. Wedged on a ledge between the mountains and the Mediterranean is the town of Sorrento situated right across the Bay of Naples. This perfect little town is where on our recent visit to the region we spent the bulk of our time. So inviting and interesting are the narrow medieval alleyways of the city dotted with a variety of little shops, gelaterias, bars and restaurants. Down to the sea we discover a real old fashioned fishing village, The Marina Grande. Here one can enjoy the view. The boats and the freshest scrumptious seafood dishes, likely off the boat that same day!

Browsing through the shops we note hundreds of products all inspired by lemons, lemon candy, biscuits, aprons, pottery, artwork and loads of Limoncello.  Of course, this is La La Land for limoncello. We learn very quickly just how significant lemons are to the town of Sorrento! And not just any lemon, it is the Sorrentine Lemon or “Limone di Sorrento” which was awarded IGP status, a Protected Geographical Indication recognized by the European Union in the year 2000. From these specific lemons the iconic sweet delectable Italian liqueur Limoncello is made.

Eager to learn more, we were fortunate enough to have a conversation with a producer of Limoncello, Nicola Dal Toso whose family has been making Limoncello for multiple generations. Here’s what Nicola had to say about the special lemon, the liqueur and Nicola’s Limoncello, the Rossi D’Asiago.

About the Sorrentine Lemon

*There’s no argument that the Limone di Sorrento has a long history of cultivation dating back to the first century A.D. This is evidenced in the frescoes and mosaics found in the ruins of the ancient cities of Pompeii and Herculaneum after the A.D79 eruption of Mount Vesuvius.

*The uniqueness of this lemon depends much on the microclimate and the proximity to the sea.

*The Sorrentine lemons are elliptical in shape, and are larger in size, not permitted to be less than 85 grams according to the IGP status regulations

*Typically they have a medium thick peel, are rich in essential oils and very fragrant and juicy

*The juice is characterized by a higher acidity; they are rich in vitamin C and mineral salts

Nicola tells us that the origins of Limoncello dates back to the Middle Ages when monks would prepare flasks for pilgrims containing infusion of lemon peels soaked in alcohol. In those times, the belief was that the alcoholic lemon solutions would ward off infective disease.  Over time the lemon elixir soon gained favour and has become one of the regions most appreciated exports being widely available and enjoyed in many markets around the world. 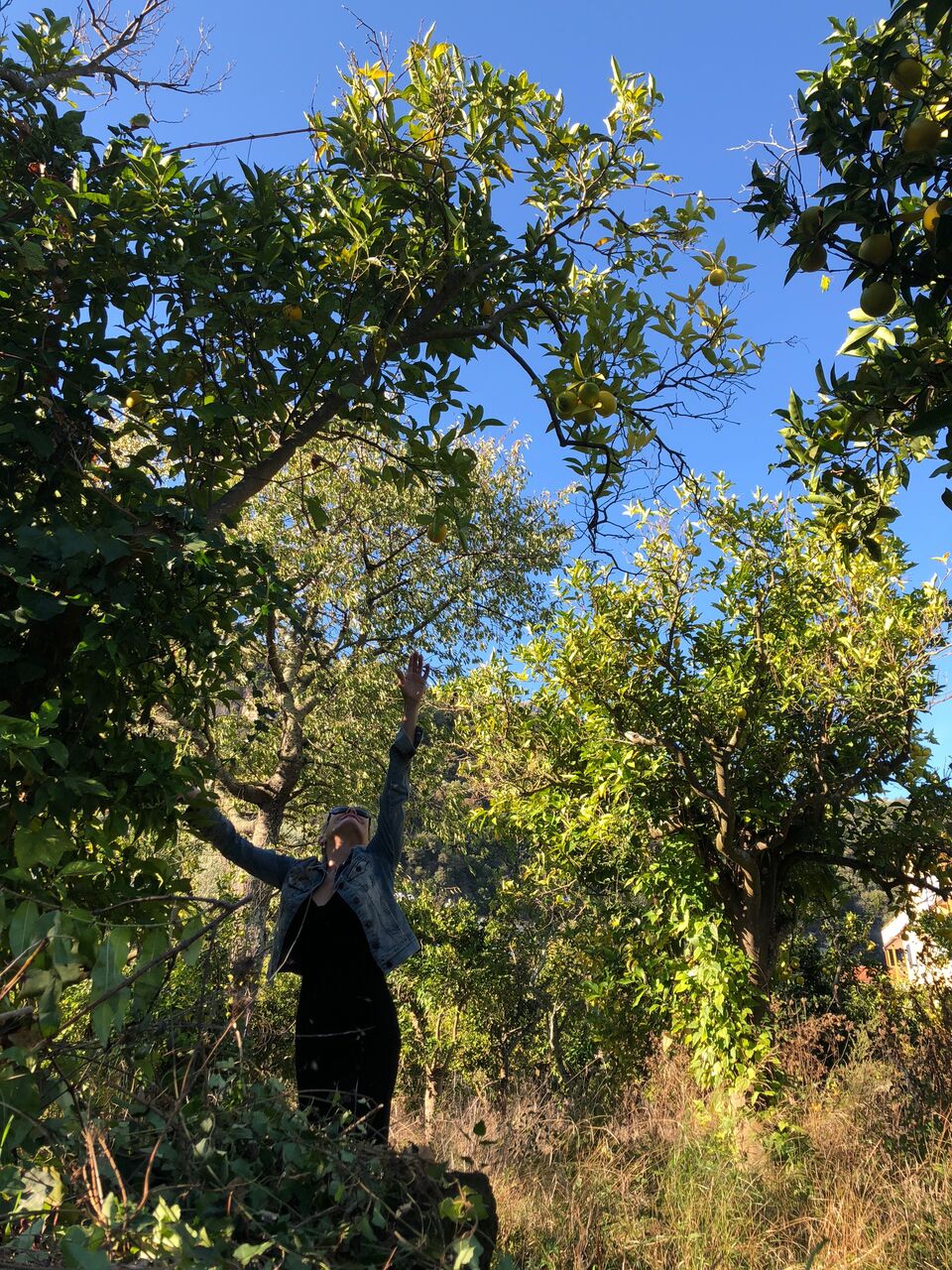 We asked Nicola to tell us a little about his company and his Limoncello, which is the #1 selling Limoncello in Canada.

The story began in 1868, in the locality of Asiago, as Nicola says “an enchanting locality of the Veneto pre-Alps”. It is a history of stills, herbs and infusion and a young pharmacist Giovan Battista Rossi.  Creating unique elixirs and liqueurs to start. Over time, he transforms the small pharmacy into an award-winning distillery, “The Highest Distillery in Europe”.

Fast-forward more than 100 years later. The Rossi D’Asiago Distillery is enjoying a “second Golden Age” as Nicola proudly asserts, “with his family using the same recipe for multiple generations. Rossi D’Asiago is an all natural Limoncello with only the finest ingredients being used to make this iconic Italian liqueur.” The result is a refreshing and wonderfully balanced sweet and tart Italian lemon liqueur with an intense lemon flavour. We love it! As an aperitif and in a wonderful cocktail we named the “Rossi D’Asiago Limontini”

Sorrento we are told is a gateway to another of Campania’s jewels that is the Amalfi Coast.

Often referred to as a glamorous playground for the rich and famous, The Amalfi Coast is also world renown for its stunning beauty and 50 km stretch of the most beautiful coastline in Europe. Its high cliffs and winding narrow coastal road overlooks beaches, vineyards, costal towns and the shimmering Mediterranean taking away ones breath and nerves if behind the wheel or a passenger on a tour bus! 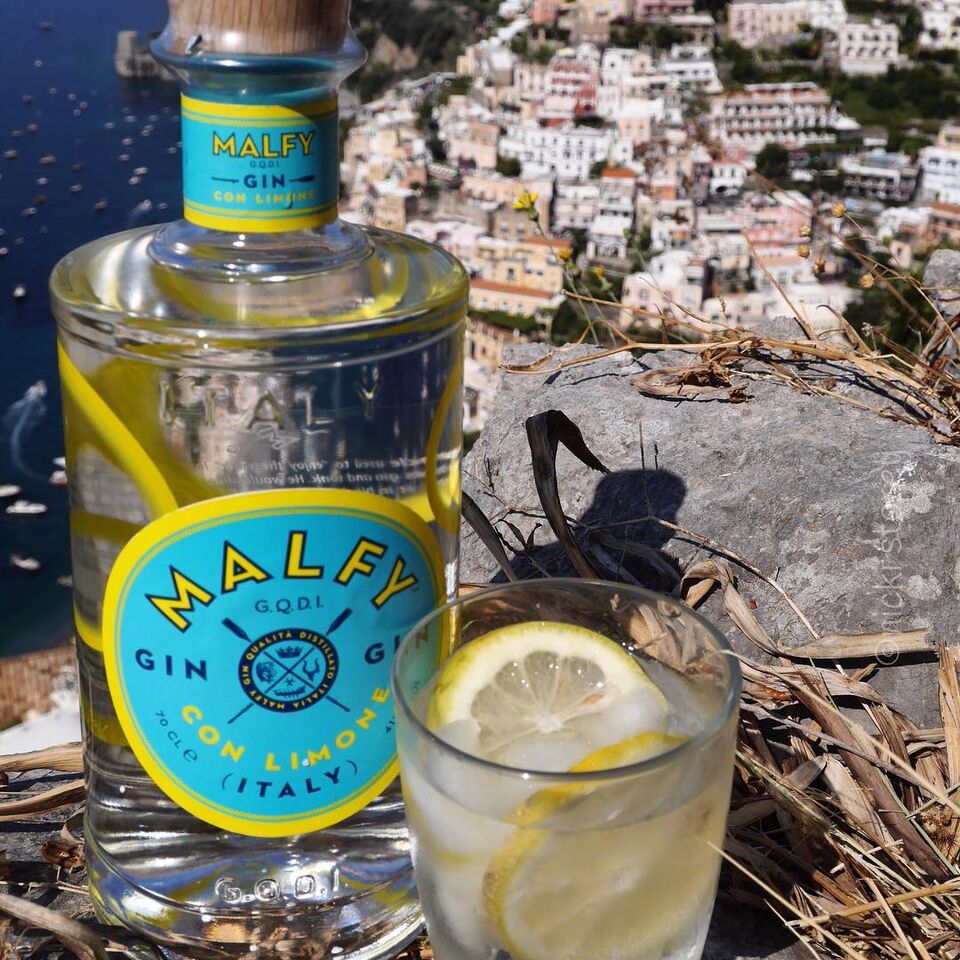 Three major towns in particular are usually included in one’s itinerary, all offering the visitor a unique experience. Positano, the most famous, picturesque and pricey. Amalfi where history takes centre stage. And the town of Ravello, a special place for the artists.

And there’s more. Surprise! Here too the lemon enjoys great status. The Amalfi version is called the sfumato amalfitano. It grows prolifically along the stunning terraced gardens along the entire coast, a site to behold. We got the full scoop on this Amalfi lemon from what you might consider an unlikely source, not a limoncello producer rather a gin.

About the Limone Costa d’Amalfi

*All lemons certified from Amalfi have to be of the “sfusato” family. Sfusato means, “spindle” in Italian and these lemons are characterized by their elongated and pointed ends.

*They are large with a thick yellow peel and very few seeds.

* The skins are rich in oil and brightly coloured

* The world-famous Amalfi lemons are known for their low acidity and delicate flavour, some say so sweet you can eat them whole like an apple or a banana.

* The Limone Costa d’Amalfi has IGP status. Indicazione Geografica Protetta that indicates their role as an important and unique regional food in Campania.

Elwyn Gladstone Founder of Biggar & Leith introduced us to one of his latest products, this unique and absolutely delicious gin called Malfy Gin con Limone, A little surprised, one doesn’t automatically link gin to Italy as a rule. We asked Elwyn to tell us a little about how Malfy came to be and what makes this gin unique. So passionate about Malfy here’s what he had to say.

“We were researching the history of gin – and there it was.

Staring us in the face! Gin was invented in Italy, in the 11th century by monks on the Salerno coast. Long before the British or Dutch”  “They added Ginepri (Juniper) and other botanicals to the alcohol – and gin was born. 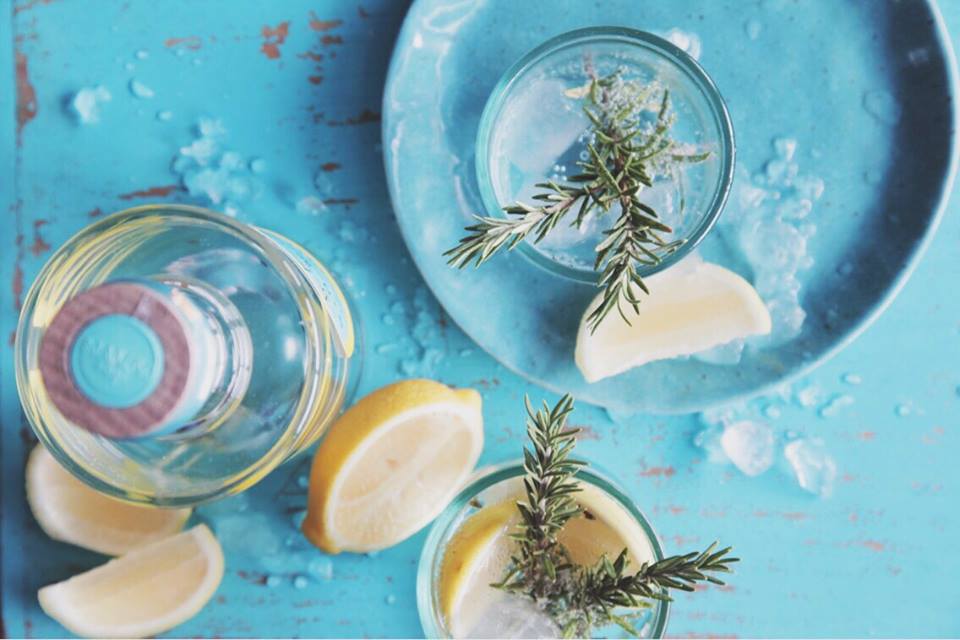 Elwyn went on to explain how originally Malfy was a small batch product being made at the Torino Distillati. It wasn’t until they tasted the Vergnano family’s Malfy GQDi, who runs the distillery that “we knew we had found a gin that represented the literal distillation of Italian quality, culture and craftsmanship that we were looking for”

Recognizing that the product had a much wider potential Elwyn set out to bring Malfy to the global market. He proudly informs us that after just a few short years, Malfy Gin con Limone is now the #1 selling flavoured gin in Ontario.

What separates Malfy gin from most other gins on the market? To start traditional gins have greater emphasis on the key botanical juniper. Malfy on the other hand “with the classical juniper hit further back in comparison. Malay is not a gin for purists. We would like to make sure that people other than just those traditionalists get to enjoy the gin party”. Upon tasting Malfy, we whole heartedly agree. There is a delicate and delightful citrus on the nose. With recognizable juniper and a blend of other botanicals our palates are not so experienced to discern. But a lovely gin, that is also housed in a bright and inviting label reminiscent of the sunny Amalfi Coast! 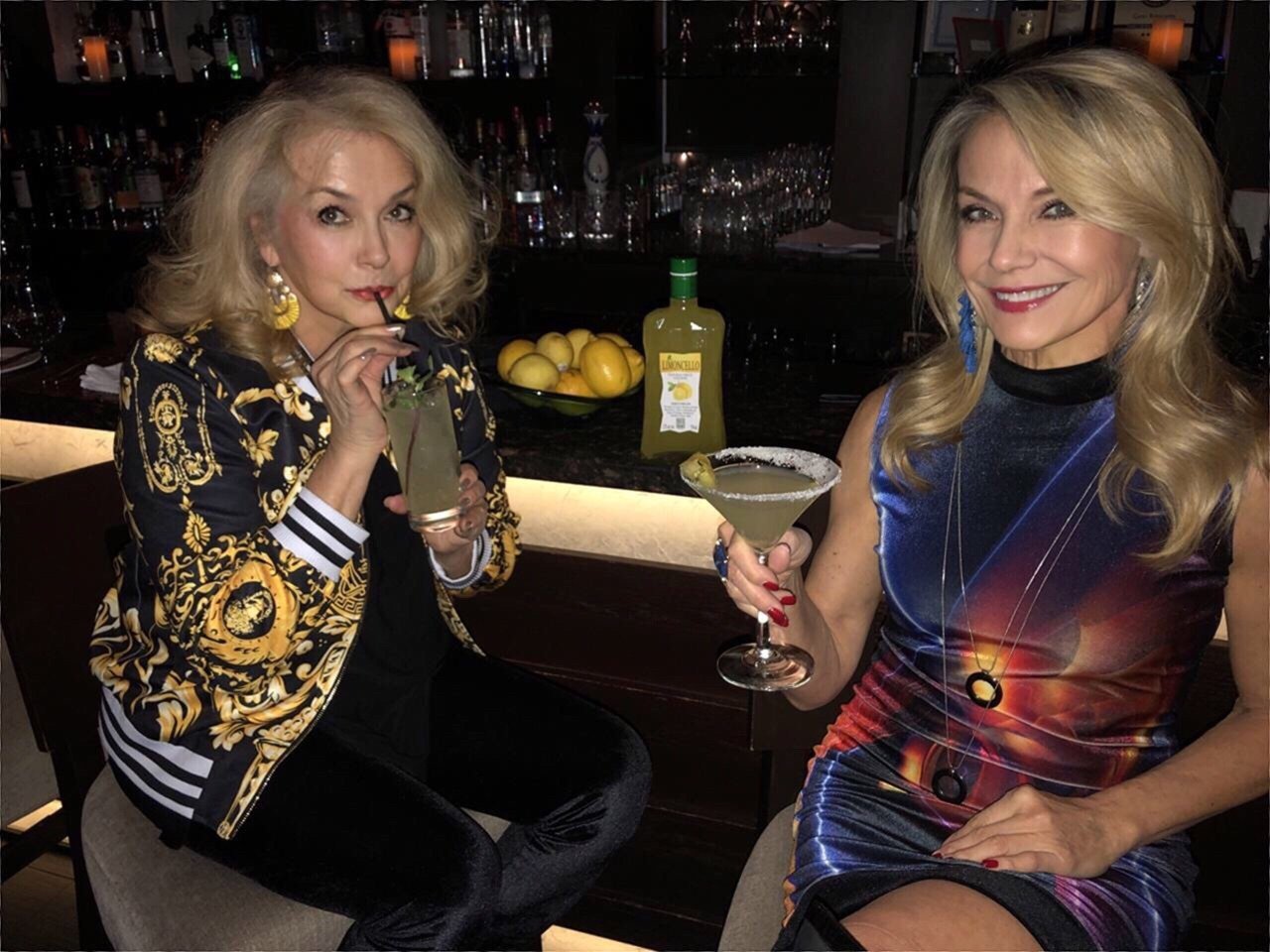 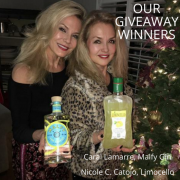 On this week’s audio podcast…Holiday Entertaining with Celebrity...