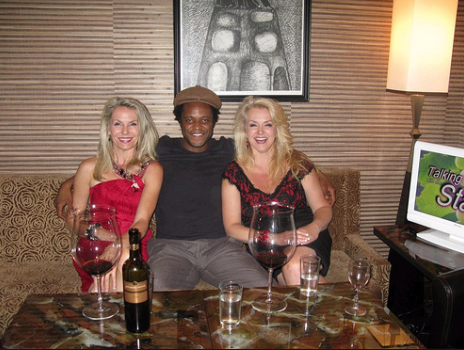 Joining us on the couch next Charles Officer the multi talented director who spoke to us about his involvement in City Sonic. City Sonic is a series of films (22 films in all) about extraordinary artists shot in places where their musical lives were transformed. Films about places where music happens in the city, all about the creative reverberations that make a music scene. Just 3 minutes in length one can view the film on your smartphone (Take your smartphone to: m.citysonic.tv) The films are about a musician and a special place that was very significant in their lives and their musical career; Care Failure ( Die Mannequin) at 102.1 The Edge, Jason Collett at Kensington Market, Bare Naked Ladies at UltraBar Show Bar and the film Chales Officer directed Divine Brown at The Rex.

City Sonic short films had their world premiere as part of the Toronto International Film Festival’s “TIFF in Concert” program at Yonge and Dundas Square. New films premiered each day at 12pm. All City Sonic screenings are paired with some of the best music-themed films, and were free to the public.

Divine Brown at The Rex directed by Charles Officer showcases this extraordinary talent and career.

What’s next for Charles Officer? Directing a feature film about the world’s fastest man! Harry Jerome, the Canadian sprinter who held the 100 metre sprint world record for over 10 years.