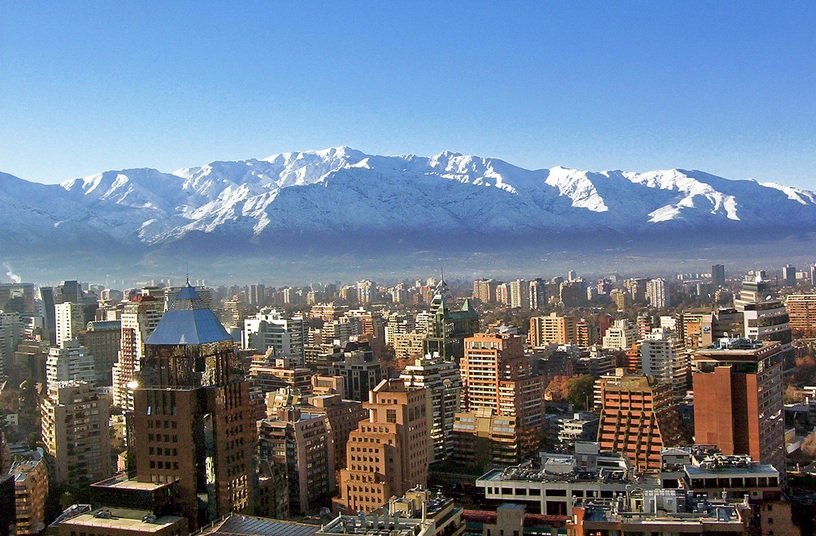 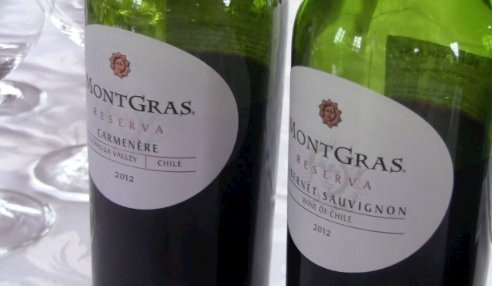 Crazy for Cabernet in Chile…. and Carmenere too!

Stunning Santiago with the Andes as a backdrop. Breathtaking!

A moment in time, frozen in our minds for ever was the vision of the spectacular Andes mountains as we approached the captial city of Santiago, Chile. Breathtaking in a  rainblow of colours, we inhaled the magnificence of the largest mountain range in the world. Chile, at last, we’d so  been looking forward to this day! On the world wide stage of wine, Chile has an enviable position!

Stunning Santiago with the Andes as a backdrop. Breathtaking!

Welcome to Chile! It may be long and skinny in size and shape. However, it’s awfully big and fat when it comes to fabuous wines and food! As a wine producing country Chile has been dealt a winning hand thanks in large part to its natural barriers. The Atacama Desert in the north, the  magnificent Andes Mountains in the east, Patagonian icefields to the south and of course the Pacific Ocean to the west. These geogrpahic barriers serve Chile well, protecting the vineyards from pests and disease, while also facilitating organic and even biodynamic viticulture.

Chile, in fact was never affected by the root eating louse Phylloxera.

Phylloxera decimated the winegrowing regions in the mid 1800’s. As a result grafting was never necessary and the great majority of Chile’s vines are planted on their original rootstocks. Unlike the majority of grapevines in the “old world” planted on the hearty North American rootstocks, their saviour! Many maintain Chilian vines are at a huge advantage with vines better able to express their character and their terroir. 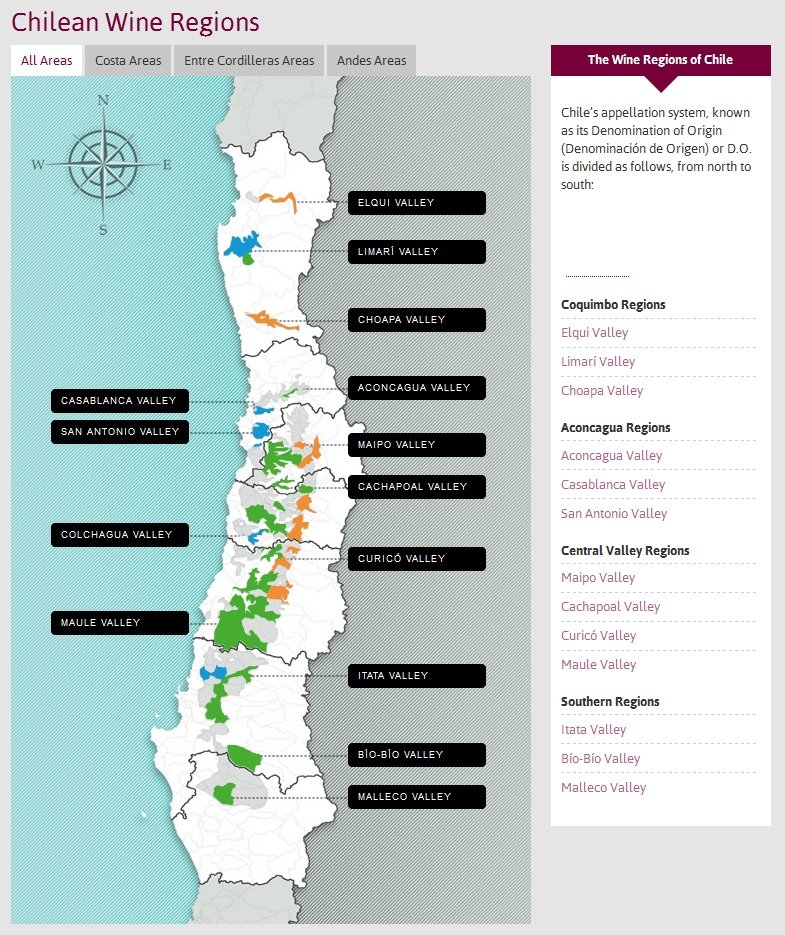 On our all too short recent visit to Chile we had the opportunity to experience three of the fourteen wine regions.

The regions including the Maipo Valley, “numero uno” for Cabernet Sauvignon. Leyda, the newest cool climate region producing premium white wines knocking it out of the ball park. The Colchagua Valley, one of Chile’s best-known regions particularly applauded for its Carmenere, Syrah and Cabernet Sauvignon.

Here we share the time we spent with Mont Gras Properties, a company founded in 1992 by  brothers Hernán and Eduardo Gras as well as Cristian Hartwig, who has since moved on to other avenues.  Mont Gras Properties’ mission was to create world-class wines that reflected Chile’s best terroirs. Today, “mission accomplished” with Mont Gras enjoying tremendous success with their line-up of wines including a variety of Mont Gras Colchagua, their ultra-premium “Ninquen” reds from Chile’s first mountain vineyard  also located in Colchagua, Amaral from Leyda and last but not least INTRIGA Maipo 1865.

Our introductory evening totally rocked… Hernan and Juan Pablo Quijada, Export Manager, “personality extraordinaire” took us to “La Mar”, one of the best, most happening, colourful and amazing restaurants in town. The music played, the apps arrived, the wines flowed, but not before a couple of Pisco Sours arrived! Pisco is a  traditional drink of Chile, made from specific grapes, fermented and distilled into a potent aguardiente. The Pisco Sour cocktail is delish, but imbiber beware…. it has a way of catching up with you, with its seductive sweeetness and flavour!

Our 1st night in Santiago, Chile included a delicious dinner at La Mar. Hernán Gras and Juan Pablo Quijada of MontGras show us the sites.

From the sea…. or ocean we enjoy an assortment of ceviche, dressed in varying treatments, amazingly delicious! Main courses include scallops, sea bass, conger and more. We enjoy a bottle of  Mont Gras’  Quatro, made from  selected handpicked grapes, a blend of Cab Sauv, Carmenere, Syrah and Malbec, aged for approximately eleven months in French and American oak, the bouquet is seductive with black currant, spices hints of leather and vanilla, with a long finish, delicious. 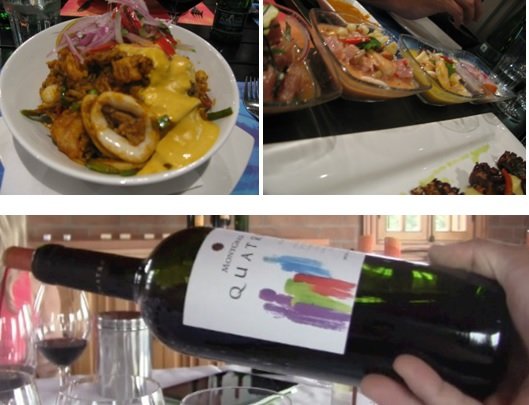 The “work” is now about to begin! At the tasting table, overlooking the stunning vineyards of Mont Gras Cabernet Sauvignon, head winemaker Santiago Margozzini is at the helm…before too long we are totally engrossed in passsionate and enlightening conversation and tasting.

MontGras winemaker Santiago Margozzini led us through an informative and entertaining wine tasting. 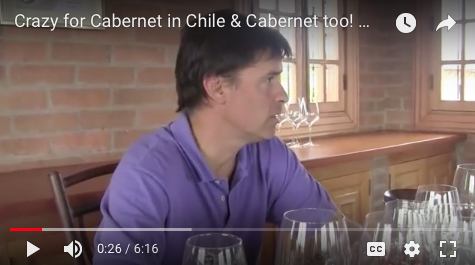 Santiago, passionate and articulate starts with the Amaral Sauvignon Blanc 2012… Susanne loves Sauvignon Blanc!  From one of the newest cool climate regions “Leyda”  delish, crisp, aromatic with grapefruit and touch of mango, captivating mouth watering acidity, nice clean finish. Leyda is a sub region of San Antonio located southwest of Santiago  in a small valley between the Coastal Mountain Range and the Pacific Ocean with the climate proving excellent for Sauvignon Blanc. 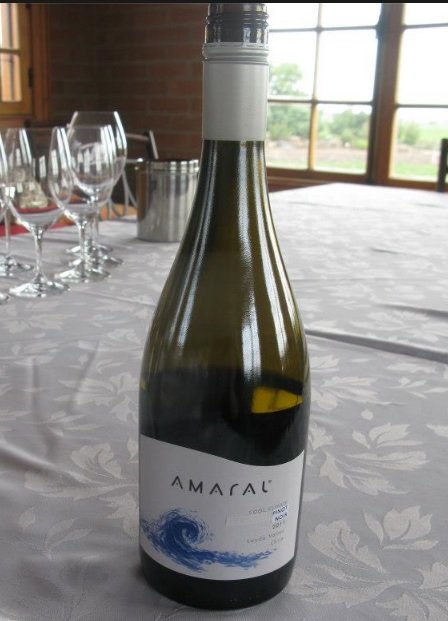 On to the reds and on to Carmenere.

Carmenere, the grape that is quickly becoming the natural associated grape with Chile! A grape with plantings in Chile that was thought originally to be merlot, brought over from France. With leaves that look almost identical it suffered an identity crisis! Until an ampelographer  (wine grape scientist) discovered differently. Lead winemaker Santiago explains here how it was discovered and how it has come to be a true appreciated grape in its own right, especially here in Chile.

Carmenere has so become a major player that it too now has its own wine glass specifically designed by Riedel. This glass allows the best enjoyment  and appreciation of its unique properties!  With a more tapered shape engineered to capture and concentrate the aromatics of this ever popular, late ripening grape. The grape that exudes spice, black fruit, ripe fruit, soft tannins.

Done right, Carmenere can seduce the most discerning of palates whether on its own or blended with a king… Cabernet Sauvignon!

Both wines available at the LCBO. MontGras Carménère Reserva, $12.00  and MontGras Cabernet Sauvignon,$12.00

From the mountain vineyard our final wine, the flagship Ninquen 2009, 60% Syrah, 40% Cab Sauv, aged for 24 months in 90% French and 10% American oak. Ditch the spitoons, it’s a wrap, bring the carafe! Layered and complex with touches of leather, lots of alluring ripe black fruit, spice and a long lasting finish. 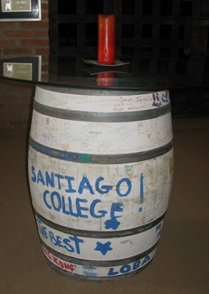 We are enrolled into Santiago’s winemaking college! 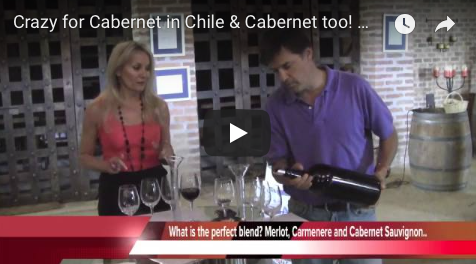 So you think being a winemaker is an easy gig? Think again, as we are ushered down to the cellar where we are faced with creating our own wine! From the blend, selecting varying proportions of Cab Sauv, Carmenere and Merlot, to bottling, corking, labelling and picking a name! Loads of fun, it’s back to chemistry 101, with test tubes, measuring apparatus, calculater and nose and taste buds! We are put to the task! 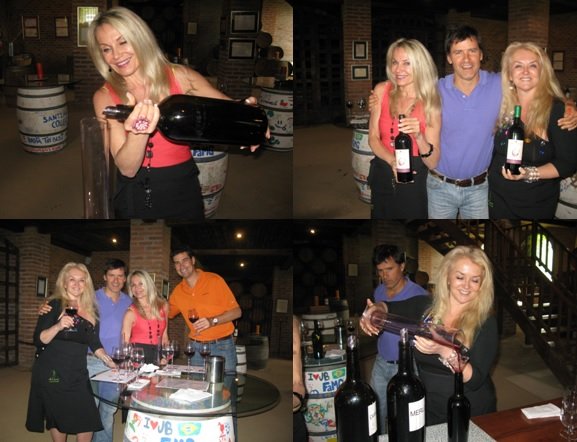 Pinch me! Seriously! Horseback riding in the vineyards in Chile! Really??? 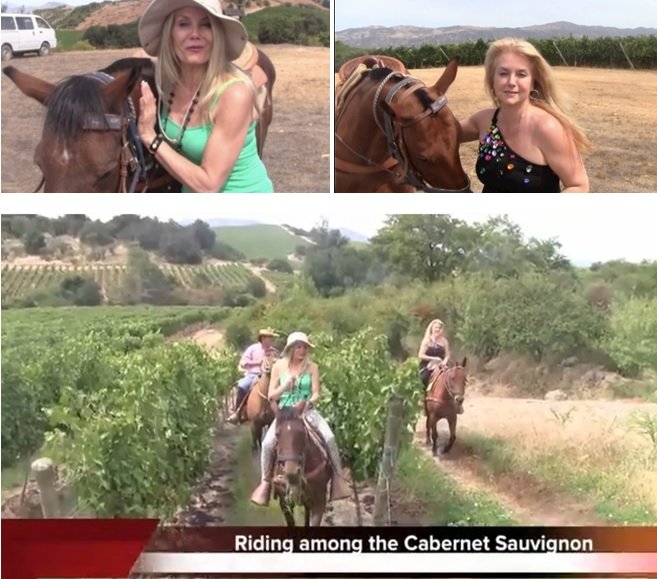 Nothing like riding on horseback through the Ninquén vineyards, simply magical! 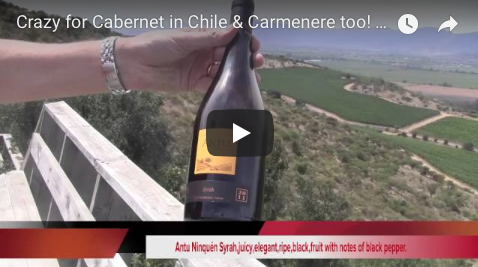 Next on the agenda….it is time for us to ascend the first mountain vineyard in Chile “Ninquén“.  We mount our horses, and are off, a breathtaking trek up the mountain, through the stunning vineyards, the Andes dutifully our compass and our inspiration. We learn that the berries are purposefully kept small, keeping the yields low, resulting in the highest concentrated and best quality grapes possible.  This is Ninquen, the mountain vineyard. “Everyone thought we were crazy, planting up here on the mountain on a wild, rugged landscape with challenges to the grape such as poor shallow soils” explains Juan Paul…

Planted with Syrah, Cabernet Sauvignon and Carmenere, the ultra premium reds that these vineyards produce are now iconic and have set a stage for further vineyards climbing “to the top”. Once atop we inhale the air, the Andes, the vineyards while we sip on the Antu Ninquen Syrah 2011… so rich, with notes of black and white pepper and hints of leather and with ripe black fruit. We’ve developed quite the appetite! A scrumptious lunch awaits  us “city slickers”! Note, Susanne’s be-jewelled dress, perfect for horseback? 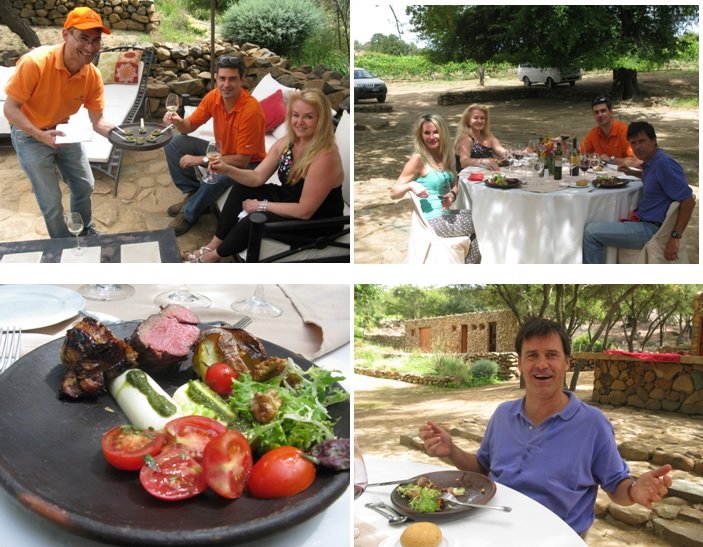 Final stop… INTRIGA, located in the Maipo Valley originally dating back to 1865 as Vina Linderos was taken over by MontGras Properites in 2005. The Maipo Valley  is known for their Cabernet Sauvignon and INTRIGA is a vineyard producing some of the finest under the direction of winemaker Cristian Correa.  We have the privilege to share with Cristian his latest two vintages as well as a barrel sample of the 2012.

INTRIGA is a vineyard producing some of the finest under the direction of winemaker Cristian Correa. 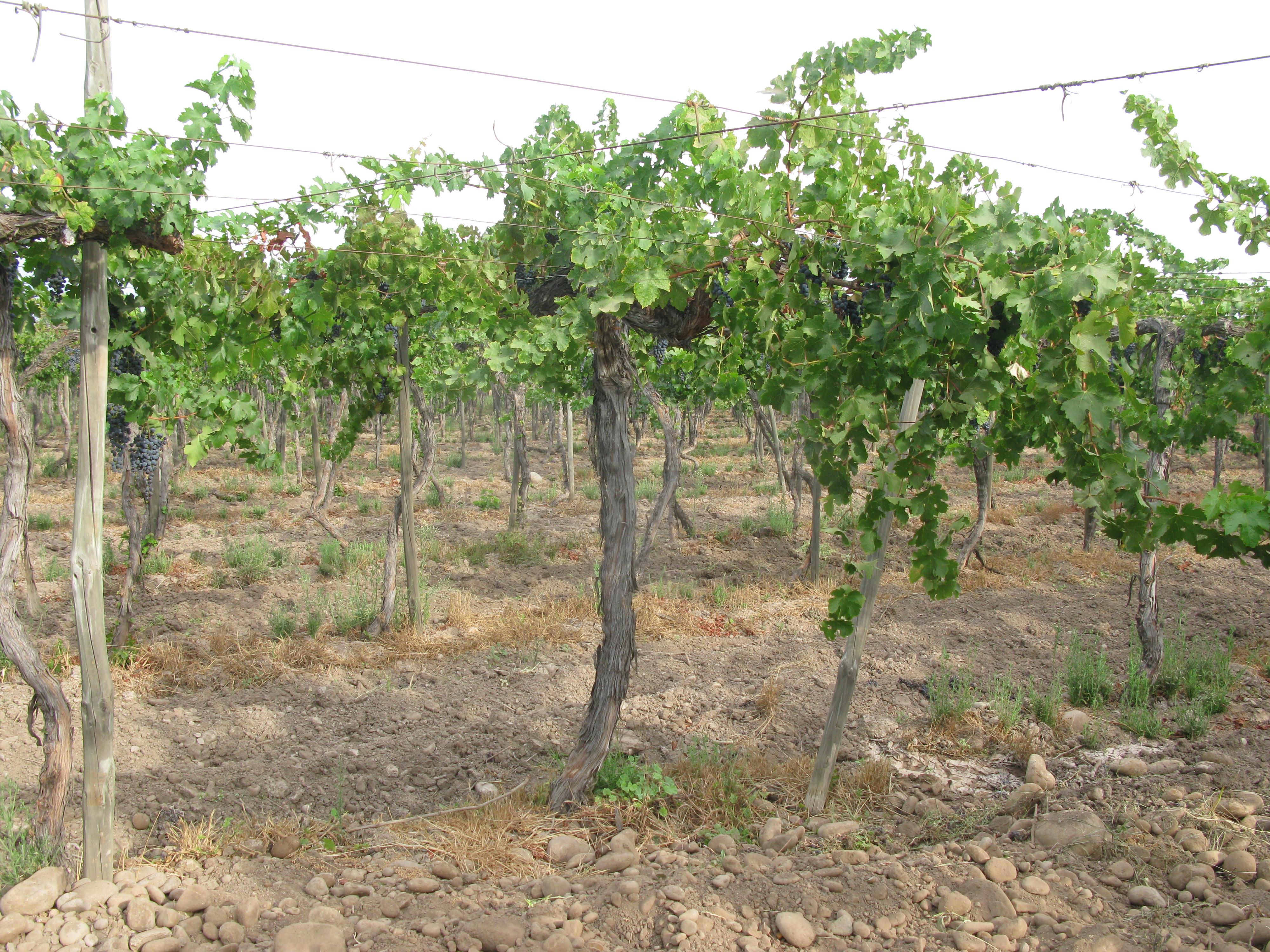 Today, over 140 years after its establishment, Intriga remains with the same mission and concept: Produce premium quality wines with great care of the fruit and the environment.

We’d like to extend a big thank you to everyone at MontGras for welcoming us and sharing their enthusiasm and passion for their wines, the incredible wine regions, the cuisine and the joie de vivre that surrounds it all in your beautiful country Chile! It was truly a magical visit and we departed “Crazy for Cab in Chile and Carmenere too”!